A (Not So) Healthy Dose of Chaos, A New World 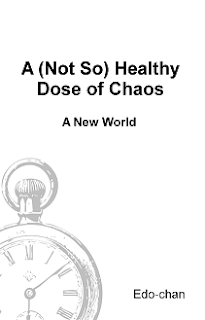 Have you ever thought about sharing your culture with those who
know little about Earth?"
Five years ago, the aliens came.
During the transition period, Kenaeth Goldwrite fills out an
application to have 'aliens' stay at his house, thinking nothing
would come of it.
Now he's a landlord to six female tenants. Then there's the time
traveler who says he's come to help Kenaeth for something he did
in the past, by teaching him how to manipulate time, and three
other time travelers are after both of them.
Will Kenaeth survive? More importantly, will he keep his sanity
while being hopelessly outnumbered in the battle of the sexes?
The chaos starts in this first book!

A (Not So) Healthy Dose of Chaos is a sci-fi/fantasy series set in the not-too-distant future, in which aliens have made themselves known to the Earth. The novel contains an abundance of action, comedy, drama and space-time manipulating antics.

The novel will be available in January 2013, first through Lulu.com, then through other channels, with an eBook version available if popularity dictates.

Until then, check the free preview at my website, in the 'Works' section!
Posted by Edward "Edo" Hrzic at 8:08 PM 3 comments: