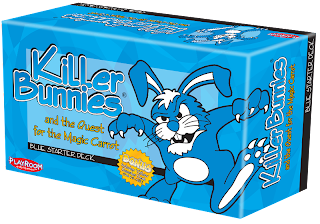 Killer Bunnies and the Quest for the Magic Carrot

I recall picking this up at a game store that I frequented a number of years ago (before it closed its doors).

It seems innocent enough a game.  You play bunnies, buy things such as cabbage and water to feed your bunnies when the need arises, and carrots.  When the last carrot is taken, the game ends, and you randomly determine which carrot is the Magic Carrot.  The one holding the Magic Carrot is the winner.

All the while, you're trying to kill off your opponent's bunnies.  And I mean with laser guns, chain saws, green gelatin (with evil pineapple chunks!), a sea-whiz mount . . . or how about a miniature black hole?

It's a delightfully morbid little game that's a lot of laughs and has more strategy to it than it appears.  The concept to most understand in Killer Bunnies is that you have to think two turns ahead, and most cards can only be played if you have a bunny in play.

The art is colorful and comical, and there are puns and popular culture references galore (especially in the expansion sets).

If you haven't picked up the game, I strongly suggest that you do.  While there are a number of expansions, you can have plenty of fun with just the basic set.  There is a deluxe set also available, but I don't have that one (I have the original blue box that comes with the bonus yellow booster deck).

You can find more information on it at the official Killer Bunnies website.  There are also a number of other bunny-related games there.

Under The Blue Sky - The Indigo

Under the Blue Sky, which was featured as the ending song to the animated series Someday's Dreamers ~ Things Precious to a Mage.  It's one of the only times I can remember that I liked the ending theme better than the opening theme.

I wanted to put an unsubtitled version here, but couldn't really find it.

Some of you probably already know about the flash card game based on the Call of Cthulhu mythos, called The Necronomicon.

Not a bad way to kill time once you get all the rules down.  See how far you can get.  My highest is 19-Yithian Librarian.  I'm sure that anyone who would spend enough time on it could get higher than that.

You can find the game here.  It looks like an updated version is here.

I started coming up with a print-on-demand to sell on The Game Crafter, and was writing down a few ideas.

One of them was a game with "runes," where players would play combinations of them with progressively better effects. It started to get a little unwieldly with the number of combinations I was coming up with.

That wasn't so much the pain in the butt. The real problem was coming up with the aforementioned runes. I would have to create them, draw them, scan them, clean them up, scale them . . . then repeat until I got everything I needed.

I was doing a project at work where I would put some kanji on my desk so that visitors could have something interesting to look at what they were waiting for someone in my department, when I eventually got an idea: "Hey! Instead of runes, why don't I just use kanji? They're already made, look like runes, already have meanings, and all I have to do is type them into the graphics software I'm using."

That's how Kanji Attack! was born.

Kanji Attack! is part combat card game, and part educational tool. Progressing through turns, each player plays matching kanji cards for a number of different effects, and the more copies you play, the better the effect is. The first to reduce all their opponents' Hit Points from 20 to 0 wins.

The cards are separated into five types: Attack, Support, Reaction, Boost and Special.

The full base set contains 108 cards (104 kanji cards, and 4 other cards used during the game), 80 tokens ("winks") to keep track of Hit Points, and accomodates between two and six players.   Future sets will include additional cards and rules.
It's planned for release in the second week to middle of September, and will retail for $19.99.
Posted by Edward "Edo" Hrzic at 8:20 PM 2 comments:

Has it really be eight months since my last entry?

Well, I have a couple of projects coming out in the next few months. I'll introduce one of them in the next post.
Posted by Edward "Edo" Hrzic at 7:39 PM No comments: