I'm not a big fan of Pizza Hut (I usually have Dominos, Papa Johns, or some from a local place that give big pizzas).  Every now and then, for a change of pace, you try something different.

Back when I was unemployed for a while, I went to lunch with my father, and decided to hit Pizza Hut for the buffet.  It was about forty-five minutes until the buffet ended, so we had the time.

As we ate, around twenty minutes later, a woman asked us if we wanted any cinnamon breadsticks -- as many as we wanted.  We turned the offer down, since my father and I don't eat many sweets.  We came to the conclusion that they were trying to get rid of it, since they couldn't legally still sell it after the buffet had ended.

We went up to pay the bill, and my father asked "What are you going to do with the leftover pizza?"  The gentleman at the counter said, "Throw it away."  My father offered to take some, and the gentleman handed him a couple of those personal-sized boxes, and we took what we wanted.

Apparently, this isn't uncommon, and the story has been confirmed by a friend of mine who used to work as a delivery driver at Pizza Hut.  However, the policy depends on the manager.  So if you go in about a half hour before the buffet ends, you may be able to take some pizza home with you as well.
Posted by Edward "Edo" Hrzic at 7:46 PM No comments:

Slot machines are very different in Japan than they are in the U.S.  You are probably familiar with those "One Armed Bandits."  Somewhat similar in design, the "plunger" (arm) is pressed to make the reels spin, and you hit the three buttons.  I'll talk a little more about them in a later post, but here's an example (as you can see from the woman playing).

Anyway, the real reason for the post is the song, called Distance, and animation from the bonus round of "Osu! Banchou" 押忍！番長 (literally Yo! Gang Leader), featuring the character named Misao.

From the Wikipedia article about Set:

Several games can be played with these cards, all involving the concept of a set. A set consists of three cards which satisfy all of these conditions:
The rules of Set are summarized by: If you can sort a group of three cards into "Two of ____ and one of _____," then it is not a set
Given any two cards from the deck, there will be one and only one other card that forms a set with them. One example of a set would be these three cards:
In one game, the dealer lays out cards on the table until either twelve are laid down or someone sees a set and calls "Set!" The player who called "Set" takes the cards in the set and the dealer continues to deal out cards until twelve are on the table. If a player sees a set among the twelve cards, s/he calls "Set" and takes the three cards, and the dealer lays three more cards on the table. It is possible that there is no set among the twelve cards; in this case, the dealer deals out three more cards to make fifteen dealt cards, or eighteen or more, as necessary. This process of dealing by threes and finding sets continues until the deck is exhausted and there are no more sets on the table. At this point, whoever has collected the most sets wins.

A friend introduced the game to a group at a regular family game night at a now-defunct comics and game store I used to go to, and for everyone who didn't know the game, their heads actually started to hurt.  The key to Set is to let the rules sink in -- approximately one week should does it; not even playing during that week.  The next time you play it, you'll start to get it.  It won a Mensa award, and you by all means don't have to have the Mensa-level I.Q. in order to play it.

You can pick it up at various hobby stores, online, and even at Borders.  There are also many variations and other games at The Set Company.  There's also a version for the mobile phone that you can download.
Posted by Edward "Edo" Hrzic at 7:14 PM No comments: 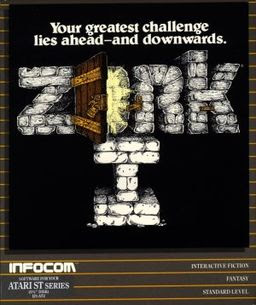 You know, many years ago, before the ages of 486s, Pentiums and all of that magnificent graphically enhanced computer sets, there was the old computer, running on MS-DOS, one in which graphics were hard to program, and computer users had to rely on something called their "imagination" (gasp!).  They didn't have graphics to illustrate a majority of things (and if they were, they were the size of what you would call Windows icons nowadays). 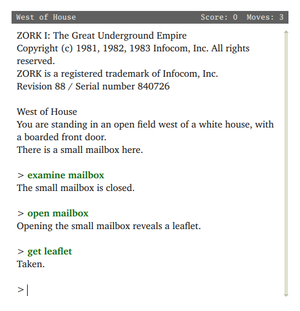 Text was very easy to display in older programming languages (as it is today), and thus became the core method of displaying worlds.  This is where the term interactive fiction jumps into the mix.  Almost like playing a novel, you controlled your actions in those worlds by typing actual commands like take sword or open mailbox (as you can see from the picture on the right).
The most popular of those games was the Zork series, filled with humor, puzzles to make you pull out your hair, and treasure-hunting to end the game.  Ah, those olden days.  There were many of these types of games in the early days of shareware, such as Beyond the Titanic, and some even tried to put role-playing elements into them.  The creator of Zork, a company by the name of Infocom, also created a slew of other interactive fiction games, such as The Lurking Horror or even Leather Goddess of Phobos (hubba-hubba!).
Interactive fiction still has a small but dedicated following.  Many of the games that were released many years ago can be played on the internet; one site that you can play most of the older ones is Play Infocom Adventures Online, which also includes the interactive fiction version of The Hitchhiker's Guide to the Galaxy.
If you're interested in programming your own interactive fiction, try the Inform 7 programming language that is incredible in that you create the game based on sentences constructed in English, rather than various commands used in conventional programming languages.
I had an interactive fiction feature about half done in Inform 7, and really should get to finishing that up some time in the near future.
﻿
Posted by Edward "Edo" Hrzic at 7:00 PM No comments: 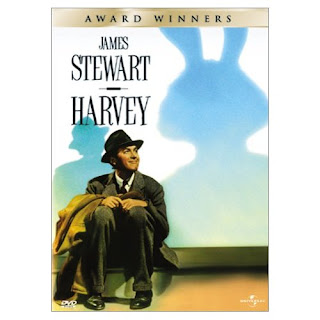 One of my favorite movies.  Starring the late Jimmy Stewart (you may know him from the annual "It's a Wonderful Life" movie during Christmas), it's a comedic and touching movie about preconceptions.  Based on the play of the same name.
Elwood P. Dowd has a friend, and from the above picture, you can probably see, it's a rabbit.  The movie centers around his sister trying to commit him to a mental hospital -- and mistakes and hilarity ensue.
I ran across this movie during a sleepover during high school with a bunch of friends with the drama club.  The next day, just about everyone had gone (minus me, another friends and the girl's house we were all staying at).  So, her family had rented the movie from the base video store, and we (the three of us) watched it, and I absolutely adored the movie.  I hunted it down on VHS (this was before DVD, mind you) and finally got a copy of it back then.  This movie also represents one of the very few times I my life that I have walked into a video store, saw it on the shelf in DVD format, and picked it up immediately.  If you've ever seen the movie (or plan to) I had memorized the monologue that Elwood does in the alley of the bar.
You can pick it up rather cheaply at various stores, or even check Amazon (which reminds me, I should start an affiliate account).  I also need to pick up the stage play script...
Posted by Edward "Edo" Hrzic at 5:51 PM No comments:

Email ThisBlogThis!Share to TwitterShare to FacebookShare to Pinterest
Labels: movies

Where Have I Been?

It's been over three years since I've returned from Japan (July 28th, 2007)...just in time for the world economy to start taking a tumble.

At any rate, I've simply been doing what everyone else is doing: staying alive, going to work, and spending time with friends.

I know a lot of everyone out there thinks that Japan is some sort of magical wonderland, but it's not: if anything, it's just like any other country out there, but also has its own unique issues (which I'll blog about at later intervals).

Overall, I'm just living my life the way that I choose: at least within the bounds of the law.
Posted by Edward "Edo" Hrzic at 5:22 PM No comments:

Well, I've decided to set up a blog. Let's see if I can actually update this on a regular basis.  As everyone who has encountered me knows, that may be wishing for too much.

Anyway, this blog will hopefully have enough to keep y'all entertained while you're here. I'll try to put reviews of items, info on old movies, role-playing games (boy, some stories I could tell you), card games, and generally commentary.
Posted by Edward "Edo" Hrzic at 5:20 PM No comments: