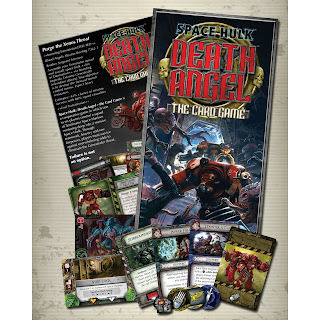 Death Angel is a card game based on the world of Warhammer 40,000.  Warhammer 40,000 (40K for short) is, at its core, a tabletop miniatures game, that has spawn video games, novels and various other media.  The full background of the universe is beyond the scope of this post, and you can read up on the series from the above links if you are not familiar.

What I will go in to is that humankind's technology has stagnated somewhat (even though they have technology far above modern time), and the Imperium of Man is always on the lookout for older technology.  One source of relics of the past are giant, floating masses called space hulks, which are a combination of space station and older star ships that have been fused together to form living areas.

These hulks usually have nasty surprises waiting for visitors -- creatures called Genestealers, from a race of aliens called the Tyranids -- think about the xenomorphs from the movie Aliens, but far more bad-ass.  They infect species to call fleets of their brethren to harvest planets...but that is another item that is beyond the scope of this post.

Exploration of these space hulks are dangerous, and thus the Imperium of Man uses Space Marines to explore them.  Not just any Space Marines, but cream-of-the-crop, bearing Tactical Dreadnought Armor (Terminator armor) to protect themselves.

There was an older board game based on this exploration called non-so-coincidentally Space Hulk (and a limited re-release recently), and was known for being extremely one-sided, and Space Marines died quite quickly.

Anyway, the card game version is similar, in that you explore a space hulk, and try to get out alive.  Each player assumes a team of two marines from the six teams available.  Depending on the number of players, they may control more than two teams.

Each turn, players play an action card to determine what their team will do: Attack, Support, or Move + Activate.  These actions allow all the team members to do something.  The only problem is, you can't play the same card in consecutive turns, so planning is imperative.  It is a good think that this game is a cooperative venture, and everyone gets to plan among their groups.  Each turn an Event card is drawn to affect (usually hinder, but sometimes help) the marines, and spawn Genestealers throughout the group.

There are a total of five locations (counting the initial location) that marines have to survive through.  Once they do and complete whatever the text is on the final location, they win.

Easier said than done.  Often, Genestealers will spawn in the most inconvenient of areas.  In the game, the marines are presented in a column, and face either the left or right of the formation, with some terrain cards sparsed in certain portions of the formation.  This is where the Genestealers spawn, and can sometimes be behind the marines, which makes it a lot harder for them to survive an attack.  If a swarm (group) of Genestealers is too large, the marine will undoubtedly die.

Some items of strategy to keep in mind:

- Doors are your friend.  If at all possible, try to put some Support Counters on the door when you can: this will reduce the number of Genestealers remaining in the formation when you move.  The Red team is crucial for this, as its Move+Activate card allows them to put two Support counters on the door instead of one.
- An action card allows ALL members of a team to do that action.  This is highly important, as one attack could mean the different between succeeded and having a marine die.
- Protect the heavy hitters.  There are three particular marines that are crucial for survival.  One is the Red team member with the assault cannon (the one with three attacks); second is the holder of the flame on the Purple team (the one that destroys a number of Genestealers equal to the die roll); and third is the wielder of the lightning claws (using its attack card, can automatically slay up to three Genestealers in range, but has a chance to die himself).  Try to keep these ones toward the middle of the formation to exploit their ranges.  Put Support tokens on the flamer-holder when you can, in order to exploit its mass-kill effect.
- Terrain cards can only be activated once per turn.  That is, the Door can only be activated once per turn, and the same goes for terminals.
- You can't spend Support tokens from marines that are facing away from a swarm in order to survive its attack.  If you are rolling to survive from an attack from a swarm, you can normally spend a Support token to re-roll if you are facing the swarm; you can't do this if the marine is facing away.

If you are a 40K fan, it is highly advised that you pick up this game, and I'm glad I did.  I might have to pick up another copy, as my cards are getting worn.  It's available from Fantasy Flight Games, and the official website for the game is here.
Posted by Edward "Edo" Hrzic at 11:21 PM No comments: 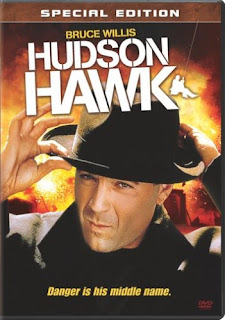 I have a very eclectic sense of humor.  So it's no wonder that Hudson Hawk is one of my favorite movies.  It came out a long while ago, and as you can see, since Bruce Willis has a much younger look to him.

Eddie Hawk was a famous catburglar, and finally got caught.  The movie opens with him getting out of prison -- then being blackmailed to go back into the business stealing some items related to a "gold machine" created by Leonardo Da Vinci (referenced in the prologue to the movie).  Highjinks, slapstick, and and one-liners ensue.  Eddie and his partner don't use a watch for crimes.  Instead, they sing songs to keep the time, and his partner often tests him on songs and their lengths.

Sadly, the movie bombed in theaters.  I really would have liked to have seen a sequel, or heck, even a TV show based on it based on the earlier years of our dynamic duo, but with bad ratings, it will never happen.

This is at least the second Bruce Willis movie that makes note of "Reindeer Goat Cheese Pizza" (the other being The Last Boy Scout).  I didn't realize it until I bought the special edition DVD earlier this year that Sylvester Stallone's brother is in the movie (one of the Mario Brothers).

It takes a specific sense of humor to "get" the humor, and I thankfully (?) have it enough.  I can quote from the movie, much to the chargrin of one of my friends who saw it for the first time.
Posted by Edward "Edo" Hrzic at 10:38 PM No comments: 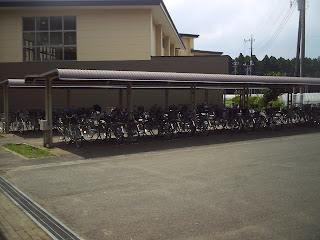 Sometimes you have to have a little bit of good-natured fun with your job.

This one comes from when I was teaching in Japan, at my first Junior High School.  I don't remember where I was exactly in the building, but I believe I was eating a piece of candy or chocolate.

One of the second-year (equivalent to eigth grade) girls saw me: a cute girl as kids go; probably has turned into a dynamite beauty now (but that's besides the point).  She stuck out her hands expectantly, and said in English:

Now, I know what she was asking for (as well as you, reader), but as I said, you have to have a little good-natured (or is this evil-natured?) fun with the job.  I chuckled and naturally replied (in Japanese):

She tilted her head to the side, obviously confused by my answer.  Then I had to explain what the phrase Please me" meant in Japanese.  She nodded, and I think she got the joke.

So, at my second Junior High School when a middle-aged male teacher did the exact same thing to me in regards to a cigarette, I had to reply to him (in Japanese):

He gave me exact same confused look, and I had to explain the point to him.  He, and two three other teachers nodded, one of the few times that a non-English teacher learned something from me.
Posted by Edward "Edo" Hrzic at 7:57 PM No comments: