A (Not So) Healthy Dose of Chaos: Memory Lane -- Progress Report #6

Well, I've ordered a proof copy of book three after finishing the next-to-last draft.  It should arrive by the end of the week.

It's better if I see it in print to do the final editing.  Then I'll do the eBook version.

All-in-all, book three should be ready by the end of the year.

I still plan to do the live stream.

A (Not So) Healthy Dose of Chaos: Memory Lane -- Progress Report #5


Fourth Draft
0% 100%
get a progress bar at dollartimes.com

The fourth draft is almost completed.

There are a couple if items that I needed to clear up, such as some character descriptions, and some exposition.

The cover will also change from what was shown before.

I'm also thinking of doing a little release event, maybe on Twitch.  For it, I was considering playing some retro games while answering some questions, etc.

Let me know what you all think.

A (Not So) Health Dose of Chaos: Memory Lane -- Progress Report #4

Third Draft
0% 100%
Get a progress bar at DollarTimes.com


The third draft is almost finished.  A couple of more drafts, and it should be done.  Hopefully.  Possibly.  Potentially.

I wanted to get book three out a lot earlier, but things have been challenging lately.  I realized the last book was out in March of 2014, and I was a little shocked at myself for taking so long to get to this point.

To make up for it a little, have a look at the preliminary cover for the third book, featuring Angelica.  It features a far less plain cover than the previous ones, which I will probably convert to at the same time as releasing book three, or a little later. 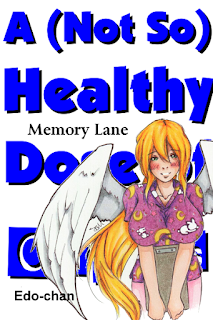 I'm also going to try and get the series on DriveThruFiction.com.  Currently, it's on Smashwords.com, Kobobooks.com, Nook.com, Lulu.com, BarnesAndNoble.com, iTunes.Apple.com, Amazon.com, and many of Smashword's distributors in other markets.

As usual, spread the word, and please put a review on the site you purchased the books from, wherever it may be.

A (Not So) Healthy Dose of Chaos: Memory Lane -- Progress Report #3

Progress is continuing, and should be quick.  I wanted to get it out before the end of the year, but various things happened.

The artist is working on the cover, and I hope the whole package is done soon.